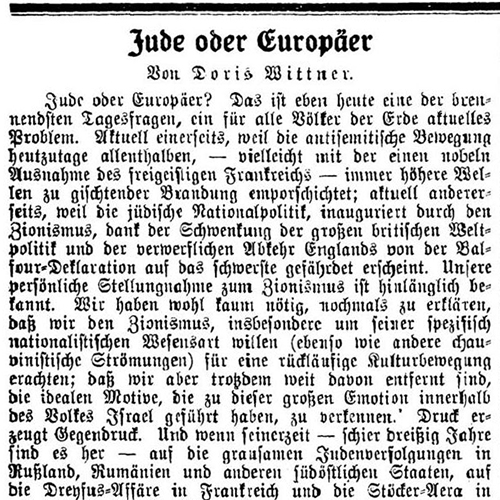 “Jew or European” is one of many feuilletons that German-Jewish journalist Doris Wittner wrote for the “Jüdisch-liberale Zeitung,” the official paper of the Association for Liberal Judaism in Germany. Readers of Wittner’s cultural criticism learned about the talents of many prominent Jewish writers, artists, and performers. This feuilleton uses Henri Nathansen’s book about Danish-Jewish critic Georg Brandes as a point of departure for discussing antisemitism, Zionism, assimilation, and European Jewish identity.

Jew or European? That is simply one of the most burning issues of the day, a current problem for all peoples of the Earth. Current on the one hand because the antisemitic movement is universal nowadays—maybe with the one noble exception of freethinking France—always higher waves ascending in layers in the spraying surf. Current on the other hand because Jewish national politics, inaugurated with Zionism, thanks to the pivoting of the great British world politics and the reprehensible retreat by England from the Balfour Declaration, appears to affect the most vulnerable. Our personal position toward Zionism is well known. We scarcely need to explain again that we consider Zionism, especially because of its specifically nationalistic character (like other chauvinistic movements), to be a regressive cultural movement. But despite this we are a long way from mistaking the ideals that have led to this great emotion within the people of Israel. Pressure generates counterpressure. And if in those days—a mere 30 years have passed—in response to the cruel persecution of the Jews in Russia, Romania, and other southeastern States, to the Dreyfus Affair in France, and the Stöcker era in Germany, a reaction occurred that believed it would be able to fulfill the ancient longing of Israel for the land of its fathers and the related soil, then we are the last to be in a position to contest the roots of such an ideology. Another point is the ideal for which the soulful hands of dreamers and fanatics attempt to reach in a vacuum; another is the harsh reality about which must be said: “Where space is limited, things clash against each other.”

“Jew or European” is one of about 100 feuilletons that journalist Doris Wittner published in the German-language weekly newspaper Jüdisch-liberale Zeitung between 1924 and 1933. It appeared below the line on December 4, 1930. That same month, Wittner also contributed feuilletons about theater critic Julius Bab and writer Franziska Mann (the sister of Magnus Hirschfeld), as well as a front-page article about contemporary analogies to the Book of Job.