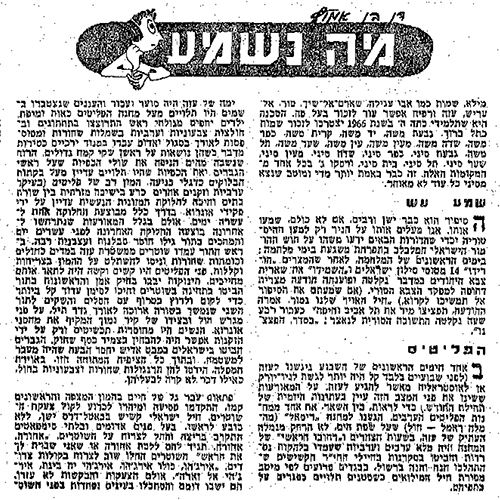 In “The Refugees,” the writer Dahn Ben-Amotz, a central figure in the culture of the young State of Israel, describes a particular moment he witnessed in a Palestinian refugee camp in 1956. In his feuilleton, Ben-Amotz portrays the experience of refugees in the camp and their interactions with an Israeli soldier, raising controversial questions regarding Israel’s occupation of the Gaza Strip.

Earlier this week I went down to Gaza (just two weeks ago, it was easier to get to New York or Australia than visit Gaza. You can read about the developments that changed this situation in the papers). I wanted to check out, among other things, one of the Arab refugee camps. I arrived at camp “Rimal” (from the word remal, which means “sand” in Arabic). The camp sits on the coast, not too far from Gaza’s old port. It was around noon, and what looked like the camp’s main street was packed with Arab men and women who gathered in groups, staring curiously at the unkempt, geriatric Israeli army reservists who wandered back and forth sloppily in their unkempt uniforms (the traditional dress code of the IDF reserves), their STEN guns hanging on their shoulders like corpses.

For over twenty years, the Israeli writer Dahn Ben-Amotz documented the birth pangs of the young Israeli nation in a weekly feuilleton titled “Ma Nishma” (“What’s Up,” literally: what is heard). Armed with a notepad and wide-eyed naïveté, Ben-Amotz toured the country trying to locate and document the diverse individual experiences lost in the Zionist melting pot.

As an immigrant from Poland who was desperate to get published, Ben-Amotz began writing feuilletons in the 1950s. He used the popular genre to pave his way into the Hebrew literary milieu. Ben-Amotz wrote the first feuilletons for Davar Ha-shavua, the uptight newspaper of Mapai (Zionist socialist party). “Ma Nishma” was located in a section under the national news, separate from the mainstream narratives about the hardships of a young state in the making. Ben-Amotz’s feuilletons were primarily urban sketches, travel accounts, and local reportage. They covered a wide range of topics, from glamorous opening nights at the theater to the minute details of a random conversation overheard at the post office. Ben-Amotz’s feuilletons were written in a natural, flowing, and localized Hebrew and introduced the somewhat archaic newspaper to a younger generation of readers.